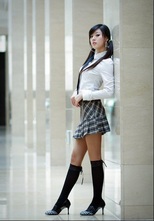 The Academy, a boarding school where young royals and children of politicians are sent to once they reach high school. Once a student enters The Academy, they can't return home until graduation day and they become subject to the school's harsh curriculum and standards.  In return for their suffering,  the alumni will become a better politician, a better strategist, a better leader.  It is a place where the world's allies are formed or torn apart, where friendships are beneficial...or could lead to a country's downfall.

One kind hearted princess will learn the harsh realities upon entering this school and although she is next in line to rule her country...The Academy proves her otherwise; exposing her flaws, shaking her confidence and tarnishing her family name. However, she can't go back home...unless she wants to face her ruthless father: The King.

Will her bad luck finally turn around or will she choose to run away from her problems?

Set in an alternate 21st-century reality where South Korea possesses a royal family, since 1945 to present, this show revolves around the lives of the Crown Prince Lee Shin and his new bride, Chae-kyeong.

The series starts off with the news that the King, Shin's father, is very ill. With the grim outlook on the King's health, the royal family scrambles to find a wife for Shin, so as to allow him to take over the royal throne if the situation requires. Despite being in love with another girl, the ambitious and talented ballerina Hyo-rin whom Shin initially proposed to (she rejects him to pursue her ballet dreams), Shin eventually marries a commoner to whom he was betrothed by his late grandfather in an old agreement with the girl's grandfather. Shin marries the headstrong yet lovable Chae-kyeong after Hyo-rin's rejection. Despite initially feeling nothing for Chae-kyeong, love eventually blossoms between the couple as time passes.

In the meantime, however, matters are further complicated with the return of Lee Yul and his mother Lady Hwa-Young, who was once the Crown Princess before the death of her husband, the late Crown Prince, older brother of the current King. Yul and his mother were chased out of the palace some time after the death of his father, and it is later revealed that this was due to the King's discovery of an affair between Yul's mother and the current King who was his father's younger brother. Yul's mother had returned with a sinister motive in mind; to restore her son back to the throne, which would have been his eventually, if his father had not died. A series of events befall the palace with the schemes Yul's mother carries out, and is further intensified by the various scandals involving the royal family, which are inclusive of the Shin's continuing relationship with his old flame Hyo-rin, and the budding love Yul develops for Chae-kyeong, his cousin's new-found bride.

Things get out of hand and many incidents happen.