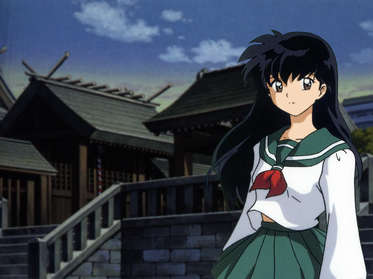 In feudal Japan, there is a half-demon named Naraku who possesses the majority of the shattered Sacred Jewel, (a jewel known to increase the holder’s power and when completed the jewel will grant one wish). With Naraku gaining power each day, the Four Demon Lords who control the four even sections of Japan must now stop this half-demon from gaining anymore power, otherwise the country could fall under his control.

Meanwhile, in the modern era, Kagome Higurashi begins her first day of high school and encounters an old friend, as well as two mysterious girls who have dark priestess abilities. Through unusual circumstances, the four girls wind up in the feudal era and they join in on the massive search for Naraku.

During their search, some unlikely characters are forced into an alliance and they begin to experience the complications of friendship, love, trust and betrayal.

But not everyone is what they appear to be…

And the mysterious pair of girls appear to be hiding something… Are they truly allies…or perhaps they have other intentions…?